ACE is designed with the idea of apprentice’s progressing through a number of different apprenticeships throughout their career. We understand that over the course of their learning an Apprentice can change their name for a variety of reasons however we have a duty to ensure that we issue certificates accurately. Therefore we may require you to load additional evidence to ACE that confirms the name change. Acceptable forms of Name Change Evidence include:

It is very difficult to produce comprehensive guidance on the range of evidence above however, following the launch of the ACE Checklist Document in November 2014, we also agreed that we would accept a signed statement from the Apprentice which are also countersigned and dated by someone in authority. This person in authority should not be an employee of the apprentice’s appointed training provider and the most common counter signatory used successfully is the Apprentice’s employer contact. These statements can also be used to confirm discrepancies between Dates of Birth and Gender on achievement evidence and the details held in ACE. The following examples are a guideline to you to advise your Apprentice’s on how to produce an acceptable statement for use on ACE. 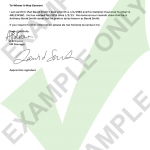 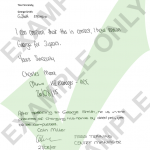 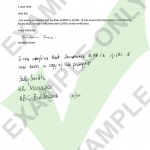 Should an apprentice’s record contain any spelling differences of forename or surname (i.e. Either between the apprentice basic information details and a piece of evidence, Or between two or more pieces of evidence), then supporting evidence should be provided explaining why there are differences present in the record.

This supporting evidence can be of a similar structure to the above name change statements which should advise as to why there are naming differences, or why a spelling error exists, and confirm the correct spelling. The supporting evidence should be signed and dated by the apprentice and either the training provider or the employer.

In May 2015, a new validation for NI numbers was introduced to prevent the increasing number of duplicate NI numbers appearing on the system. If an Apprentice has been entered onto ACE previously, the forename, surname and NI Number fields for any new records will need to match the existing record exactly. If you enter an Apprentice and the NI Number matches another record in a different name you will see an error message that will prevent you from adding the details to ACE.

If we find any major discrepancies between NI Numbers we may ask you to provide evidence of your apprentice’s NI Number or change of name documentation before you can register them on ACE. Statements signed by an Apprentice cannot be used as evidence of the correct NI Number. Examples of acceptable evidence for NI Numbers is as follows: